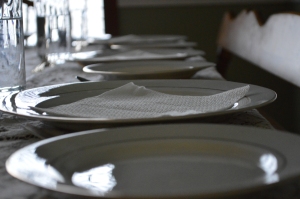 Abe Lincoln gave us our country, whole and emancipated. He gave us debate (along with Douglas). He gave us a war and saw it through to the end, at which time he decided that some purposeful, focused gratitude was in order. Although Lincoln’s religious leanings seem pendulous, his moral compass was true. As his election ushered in the Civil War, I wonder if he felt the weight of all that death? Not having the benefit of hindsight, he would naturally ask himself if holding the country together was really worth all those boys and all those graves. Although some of the political creativity he employed to save the union would fall under the-end-justifies-the-means… here we are. I’m thankful for a strong country that has seen precious little terror, relative to the world. How appropriate that the one who initiated Thanksgiving is the one we can thank for our oneness and all the blessings therefrom.

Thanksgiving, contrary to popular belief, didn’t start with the pilgrims and Indians. Rather, the Thanksgiving holiday was initiated by Abraham Lincoln in 1863, when the war was finally turning in his direction and he could name some tangible, national blessings for which to thank God publicly. His address follows. I long for a person who would lead our country, who would say this because he believed this:

The year that is drawing towards its close, has been filled with the blessings of fruitful fields and healthful skies. To these bounties, which are so constantly enjoyed that we are prone to forget the source from which they come, others have been added, which are of so extraordinary a nature, that they cannot fail to penetrate and soften even the heart which is habitually insensible to the ever watchful providence of Almighty God. In the midst of a civil war of unequaled magnitude and severity… Needful diversions of wealth and of strength from the fields of peaceful industry to the national defence, have not arrested the plough, the shuttle or the ship; the axe has enlarged the borders of our settlements, and the mines, as well of iron and coal as of the precious metals, have yielded even more abundantly than heretofore. Population has steadily increased, notwithstanding the waste that has been made in the camp, the siege and the battle-field; and the country, rejoicing in the consiousness of augmented strength and vigor, is permitted to expect continuance of years with large increase of freedom. No human counsel hath devised nor hath any mortal hand worked out these great things. They are the gracious gifts of the Most High God, who, while dealing with us in anger for our sins, hath nevertheless remembered mercy. It has seemed to me fit and proper that they should be solemnly, reverently and gratefully acknowledged as with one heart and one voice by the whole American People. I do therefore invite my fellow citizens in every part of the United States, and also those who are at sea and those who are sojourning in foreign lands, to set apart and observe the last Thursday of November next, as a day of Thanksgiving and Praise to our beneficent Father who dwelleth in the Heavens. And I recommend to them that while offering up the ascriptions justly due to Him for such singular deliverances and blessings, they do also, with humble penitence for our national perverseness and disobedience, commend to His tender care all those who have become widows, orphans, mourners or sufferers in the lamentable civil strife in which we are unavoidably engaged, and fervently implore the interposition of the Almighty Hand to heal the wounds of the nation and to restore it as soon as may be consistent with the Divine purposes to the full enjoyment of peace, harmony, tranquillity and Union. – Abraham Lincoln

Like all American holidays, Thanksgiving is mutating into something else: Thanksgetting.

Last year people were still up-in-arms over the Black Friday coup. I remember because I wrote a post, adding my voice to those of the protestors. Now Thanksgetting is the status quo. It should shock us how smoothly our priorities slip. This year we won’t hear a peep about whether or not it’s rude to leave the table for the tent-spot on the sidewalk. It’s expected. Part of the holiday. I get the lure. It’s like hunting. I hunt for thrift-store bargains all the time and consider it cathartic to roam the isles smelling of old dust and chemicals, to pray before slipping my leg into a pair of jeans that may be home to a spider, to pray that I not get chiggers or lice or any of the other things one can also get in expensive department stores, but they smell like cinnamon or flowers, so I forget to pray there.

Which leads me to the point. It smells nice in America, so we forget to pray. America is like the Starbucks of the world: a bubble of soft jazz music, nobody-judges-you-ever, and the aromatherapy of roasting coffee and sugar. We are lulled by our luxuries into believing that everything will always be alright, that an arsenal of flowers will win the day, and we can think theoretically without ever having to take our ideologies to the test kitchen.

I invite you to read and re-read Lincoln’s proclamation. It’s not a light read, I know. But it’s a step toward a heart that understands the magnitude of God’s providence and the miniscule amount of gratitude we collectively show Him. As a nation, I’d love to see our culture return to thoughts like these. It begins in my heart when I actively pursue gratitude. It begins in yours when you decide to focus on what you have as opposed to what you covet.

Thanksgetting doesn’t have to be our holiday this year.

5 thoughts on “The Thanksgetting Holiday”