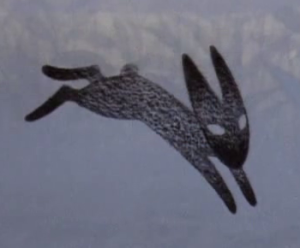 As they approached, a big rabbit appeared over the edge of the ditch, looked at them quickly and vanished into the bank. Hazel let out a cry and floundered after as best she could in the cumbersome space suit.

“Don’t,” Tom said. But Hazel didn’t listen. Their ship carved the very ditch into which the rabbit, and Hazel, disappeared. A swath of ivory several hundred feet long was the scar they bestowed upon this brown world.

Their crash bubbles saved her and Tom, but not Ike. Because the cockpit was cordoned off from crew seating by a reinforced steel shell, all Hazel heard was a groan and a squelch. An unnerving odor bloomed in the cabin.

Hazel crinkled her nose and called, “Not your best landing, Ike.” When silence was the reply, Hazel’s guts unspooled. Tom’s eyes were closed like a terrible roller coaster had just come to a stop.

At first Hazel thought a month’s worth of chile meals had splattered on the glass of the cockpit. Then she saw Ike’s horseshoe necklace and flight uniform in the muck. Hazel didn’t remember vomiting or screaming, but Tom appeared, holding her, using a soothing voice. Ike didn’t suffer, Tom said, and wiped her mouth with his bare hand.

His fingers lingered on her lips, sending a bolt of icy realization.

More than once she’d caught Tom giving Ike sidelong glances. There was malice in them, she was sure. Tom didn’t even seem upset about Ike.

It was Hazel’s idea to check out the planet. Tom wanted to return by autopilot immediately. Their systems told them it was 100% uninhabitable.

Which was why the rabbit couldn’t be real.

Tom was slower than Hazel, but he reached the edge and peered over. Hazel had a gun trained on his heart.

Every Friday Microcosms holds a flash fiction contest. I like the spirit there and enter whenever time permits. This week’s prompt was to choose a book off your shelf (hopefully we all had shelves…), turn to page 73, and use the first non-dialogue sentence of the first paragraph on that page. I chose Watership Down by Richard Adams. Watership Down is my favorite fiction book on leadership. Stephen King refers to it in The Stand. I believe he based his character, Nick Andros, on the protagonist of Watership Down.