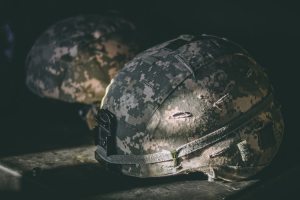 The door slammed shut. Ava impatiently leaned back against the wall and waited for her husband to return to the living room.

The tears gently fell down her flushed cheeks as he joined her. “Aaron, do you have to go?” She asked.

“You know I can’t refuse, Ava. They need me.” He slowly took hold of her shoulders with his strong hands.

“They have plenty of other soldiers,” she snapped and was soon met with a look of concern. “I just can’t bear the thought of you leaving and not returning home,” she whispered, hanging her head low and avoiding his eyes.

He gently placed his palm underneath her chin and raised her face so she was staring into his crystal blue eyes, “I’m going to be fine,” he whispered as he wiped a tear from her cheek.

“Promise me… promise me you’ll come back home,” she begged as she stared into his eyes, his hands still cupping her pale face.

“I promise,” he whispered as he brought his lips to hers.

War came over the horizon like a slow-moving tank. The soldiers became anxious. Violence once confined to the television was playing out in the vast field before them. Bullets came bursting forth like infuriated hornets. Dust spurt up from the ground into the murky air surrounding them as a forceful blast knocked Aaron off his feet.

“Get up soldier!” General Reed roared over the earsplitting sound of bullets.

Shots continued to fire through the cloudy smoke as Aaron slowly stood up and gained his composure. A bullet came tearing through the smoke and penetrated General Reed’s shoulder. Crimson soaked into his sleeve, radiating outward from the wound. He hit the ground with a tremendous thud as the battle continued on.

“The General’s down!” A soldier’s voice erupted into the dusty air. The army instantly tensed, fearfully knowing that without him they were on their own; but within this panic burst forth a great determination.

They turned to face their terrible foes with their muddy hands clutching their rifles. Anger kindled in their eyes, burning a fire fueled with fury. With each bullet fired, they knew nothing more, their brains simply shut down. They fought like the devil, devoid of sympathy, crushing and slaughtering the enemy. They were thirsty for more blood. Consumed by the harsh brutality of war.

Gunshots came thick like winter hail. The tin projectiles sliced through the air, blind to their purpose. Each one tore into something, be it inanimate or living, spilling tree sap or blood with equal unfeeling. There was a time, at least, the ones pulling the trigger might have felt something, remorse, guilt, compassion. Not anymore. They fought on viciously till the surviving enemy began to fall back, then, slowly retreated across the field. As the battle died down, the red sun rose mightily above the battleground.

“Aaron, we need an extra hand over here with the General!” A soldier cried from across the battleground. He quickly waded his way through the fallen soldiers sprawling helplessly on the ground. They contorted in unnatural ways, gurgling and wailing in agony.

“We need to get him back to the medical tent,” Aaron replied, as he inspected General Reed’s bullet wound. “He still may have a chance.”

Ava paced back and forth through the living room, her head growing dizzy from the stress. Her moist hands grasped the phone as its repetitive tune filled the empty air of their apartment. She glanced up at the clock as the phone cut out again. The minutes passed by unaware of the fear they caused. They had scheduled the call for six o’clock tonight. It had been planned months in advance. She had counted down the days until she could hear his voice again. She awaited the moment he could convince her it was all going to be okay. Yet the clock read five minutes past six and he hadn’t answered.

Her mind raced with thoughts as she tried to reason with the queasy feeling in her stomach. The sudden ringtone made her jump as it erupted into the cold apartment. She collapsed onto the sofa, letting out a sigh of relief as she answered the phone and his calming voice filled her ear. She sat silently as Aaron retold the tales of the last few months. He sounded determined, his voice confident as he described the scenes of the previous days. She listened anxiously, her breath caught in her throat every time he mentioned the dangers he was facing.

“You saved the General?” She inquired as she pressed the phone close to her ear. She lay there on the sofa clutching the phone as if her life depended on it; her knuckles turned white from the strain.

“Not exactly, I mean I wasn’t the one operating on him,” Aaron affirmed. Ava observed each word he said, discerning a slight fatigue in his voice. She caught muffled words from his bunkmate’s conversations. His solid boots thumping on the floorboards filled her ears, she pictured him walking strongly across the room in his uniform.

“You saved him. Just like you saved me,” Ava whispered into the phone.

Just as Aaron was about to respond a soldier burst through the door.” The enemy is back for another round of fun,” the soldier announced as he stood under the door frame,” General said to prepare.” The soldiers rose from inside the bunk and proceeded outside.

“Aaron, let’s get a move on. They won’t wait all morning,” the soldier beckoned.

“Yeah, just a second,” he replied, and then turned back to the phone,” Ava, I need to go, but I will call you later, alright? I love you.”

“I love you too,” She replied as her hands began to tremble, “Be safe,” she added.

“I will,” he replied, then she heard the click and he was gone. She slowly brought the phone down to her heart and held it there.

“Dear God, please keep him safe,” she whispered into the empty air of the living room.

The army advanced as one, a sea of green as if they were all together one brain instead of many. The quake of the boots on the cold dirt was the affirming thunder of a coming storm. Their rifles slung over their shoulders, swaying back and forth as they traveled to the battleground. Each face was grim against the frigid wind. Every mind was as much a battlefield as the ground beneath his feet. Before the enemy approached, each soldier had time for his thoughts, to bid farewell to far away loved ones, while attempting to wipe all emotion aside to concentrate on the task at hand. Every gaze laid resolutely ahead, and when the cry came, they launched forward without delay.

The bullets whipped past their heads with violent force as the crimson sky came alive. Brilliant gold and orange hues bled like fire over the field and beyond. Beautiful red and yellow banners filled the sky, illuminating the brutal scene beneath it in its copper and scarlet rays. The first sliver of the moon glanced over the skyline in a luminous, white form. Gradually it raised, a defined circle in a vibrant backdrop.

When the thunderous sound of bullets had died away, the chilled air was met with a sudden serenity. The battlefield slept in silence, for it was now a graveyard for the unburied. Their corpses rested among the buttercups and forget-me-nots under the shadows of the moon. These men, once boys who played in their yards with sticks and laughed at each other’s absurd tales were now meat for the birds. Their eyes were as immobile as their grotesque limbs. Their souls had long withdrawn to the celestial planes to walk with their ancestors. The battle was won. The enemy had lost.

Ava awoke in a cold sweat, her mind replaying her nightmare. Every time she blinked she saw a bullet tearing through the air and puncturing Aaron’s heart. Over and over, she witnessed him hit the ground like a helpless child. She glanced out the window, the sun was beginning to rise, shadows of scarlet and tangerine shone down on the little city. Slowly she stood up from the couch, where she had fallen asleep shortly following her call with Aaron, and grabbed her keys, heading out the apartment door.

The humming of the engine consumed the air on the warm summer morning. She drove down the winding road, her mind racing with various thoughts as the speedometer mindlessly rose. She proceeded to relive the nightmare, her brain just couldn’t shake it. She cried out in frustration; she couldn’t lose him. She couldn’t take another loss. Her thoughts drifted back to when her mother had died, and how it drove her to the edge.

She remembered the hollow, nauseating feeling she had felt on that dark night as she inched closer; her toes numb as they suspended off the edge of the roof. How the chilled breeze blew her auburn hair wildly; its forceful touch beckoning her to take another step as she gazed down at the soundless street. The desperation in Aaron’s voice broke her heart in two on that windy night, but she continued to creep closer to the edge of the roof. She was willing to end it all until he uttered three little words into the wind. She had felt alone and abandoned. Her mind continued to assure her he wasn’t worth it, that it would be better if she jumped. She was clouded by the loss of her mother, the grief had consumed her, but Aaron had pulled her out of the misery and pain. He reached into the darkness and saved her with the words: I love you.

A single tear slipped from her glistening eyes, slowly running down her flushed cheeks, and falling into her lap. Her vision clouded as her mind raced on. She was so lost in thought she didn’t take note of the bright halted headlights as she barreled around the corner. At the last second, she swerved, avoiding the crash but drifting into a nearby ditch. The car rolled over, the headlights swirling like crazed pinwheels. The overpowering sound of metal being crushed filled the air. Her head smashed up against the hood of the car. Her arms flailed. They desperately sought out something to grab, to stop the forward path her body insisted on following. The seatbelt tugged on her skin with every harsh lurch the car made. Her bones and muscles felt like they were being crumbled and shoved into a tiny box. As the car came to a stop, a fist of grey smoke formed above it, then everything fell silent.

Ava sucked in cramped air, her lungs contracted with such intensity she was afraid they would fold into themselves. The taste of coppery blood was pooling in her mouth. She felt it grazing her teeth and soaking her tongue. A ringing noise erupted from the silence as her shattered phone screen lit up. Aaron’s name appeared on the screen, she desperately lunged forward trying to grasp on to her last hope. Cloudy spots began to form in the corners of her vision, causing her head to feel like the only thing inside of it was static; then the darkness swallowed her whole. The phone continued to ring, its monotonous tune the only noise heard over the silence until the distant sound of sirens consumed the warm morning air.